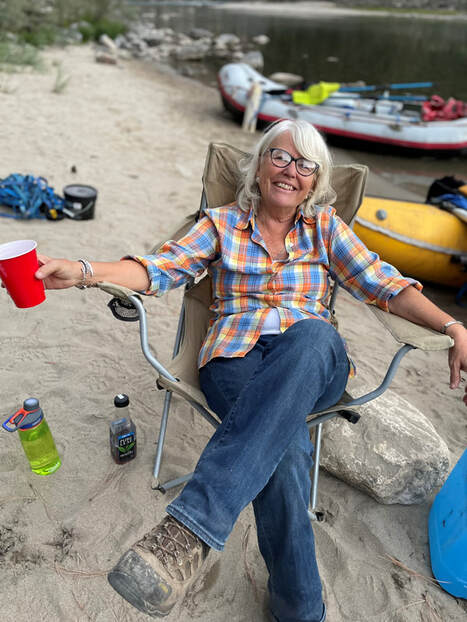 At age 60,  I found myself suddenly single--- on my own financially and emotionally with only a few years left until an inevitable retirement. It was a difficult time.

I had a full-time job at a daily newspaper where I had worked for more than 20 years as a business news reporter, editor and columnist. But I was dealing with emotional and financial trauma because of an unwanted late-in-life divorce. There were many sleepless nights as I cried over the loss, worried about what to do, and worse, what would happen to me?

Several months into the thing, on a dark (and yes, stormy) night in January with cold rain coming down outside, I had a talk with myself. "You've got to embrace the life you have been given," I told myself, "or life is not going to be very rewarding."

The next morning, I arose with renewed purpose, looking ahead, not back at a past that I couldn't change. There have been emotional and financial ups and downs and it has required discipline to hold on to that forward focus but, (drum roll, please) things have worked out.

As a business news editor with a weekly column, I began researching the economic facts about women, money and retirement. Typical of many women I had not spent much time thinking about my financial future. It never entered my mind that I would be on my own.  Yes, I had been stashing money into a 401(k) at work and had saved in my own IRA. But my retirement plans were vague, fuzzy. I had other things to think about until The Split.

What I learned from my research about women was downright disturbing. Statistics show that women save little for the long-term -- putting money instead into children and short-term needs. In the end, many women find themselves grievously short of money to support themselves in their old age.

According to a Brandeis University study, half of single women over the age of 65 face the real crisis of outliving their financial resources. And women are much more likely than men to face their elder years alone. For instance, only 57 percent of women age 65-74 are married, compared with 79 percent of men the same age.

I learned that many women find themselves, as I did --- 60 and single without a plan.

I began researching and writing. That spring, a friend of mine who was a CPA and an estate-planning attorney and president of her professional organization, teamed up with me to host several money workshops for women. They" sold out." I began writing at sixtyandsingle.com, first at the newspaper, and then in my semi-retired from my home office where I also continued to freelance business news articles.

It has been a tumultuous decade: I’ve divorced, retired from my full-time newspaper job, rolled over my 401(k) nest egg, signed up for Social Security and Medicare, remarried (here's photo below of Ken and me), helped my mother in her final years, settled her estate when she died and gained confidence as an independent investor.

Among my best-read blog posts -- How to Marry after Age 60. Think pre-nups and joint household accounts.

Until lately, I wrote a Smart Money column for the Portland Tribune and made regular contributions at sixtyandsingle.com.  Passionate about financial literacy,  For eight years, I mentioned some of these topics in a weekly business news radio bit on KXL 101.1 FM in Portland, Ore.

Since then, I have teamed up with the folks at TVCTV public television in Beaverton, Ore. where we tape Smart Money shows about money. I first co-hosted the show with veteran business news TV journalist, Joe Smith and now work with Pat Boyle, from KXL.  You can view these shows on YouTube by searching Smart Money TVCTV and my name.  click here.
​
I am a lucky woman. Every day I learn, share and write about women, money, investing, retirement planning and meeting life's challenges -- single or married.

My columns and blog posts are going into my book, "Smart Women Smart Money Smart Life: Take Charge Now to Have the Future You Deserve!." for sale at Amazon.com. click here.

Meanwhile, I have launched a workshop, Own Your Future, focused on saving and planning financially for the long-haul, targeted to both women and men.

I meet women all the time who face job and money transitions and who want to do them right. It’s about building confidence and taking charge of  the future.

I hope you will join me in spreading my message of hope and encouragement. This is your money, take charge of it. No one cares more than you do.  Here's a link to the 2021 Columbian newspaper article profiling m. click here.
Thanks, and good luck. - Julia